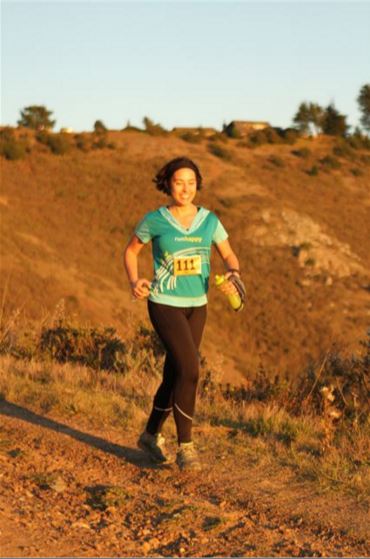 Running in the sun

I ran the North Face Endurance Challenge on Saturday.  It was seriously the hardest race I have ever run.  51.2 miles and 10k of elevation gain.

[This is a really long race report, so don’t feel obligated to read all of it, especially during work hours. 😉 If you’ve read the first line, you’ve already read the important parts. I’ve also never written a race report, and I can’t believe how long this one is.]

Situated in the visually stunning Marin Headlands just north of the city, The North Face Endurance Challenge Championship course has surprised runners with both its scenery and amount of elevation change. Participants are encouraged to train for repeated uphills and downhills of several hundred feet at a time. A majority of the course covers a runable fire road (very little technical single track) overlooking the Pacific Ocean with occasional glimpses of the Golden Gate Bridge.

There were several races of varying lengths, from a 5k to a 50 miler. I ran the Gore-Tex “50-mile” [which, as I mentioned, ended up being about 51.2 miles. But who’s counting? More on that later].

The race started at 5am, which meant a 3am wakeup call [brutal!].  We started out in a pack that quickly spread out as we started up the first hill.  It was completely dark; there aren’t any city lights in the valleys between the mountains. The only lights were the stars and a string of runner headlamps going up the hill.  The sun rose at some time during the race, and everyone’s spirits picked up a bit.  The ocean was a steely-grey color, and we could hear the ocean waves on the cliffs below.  Not much better than NorCal nature on a pretty day.

This was a very hard race.  There were several points in the race where I seriously considered dropping out, not only because of exhaustion (5 hrs of sleep the night before), but because of the incredibly difficult terrain.  See forthcoming examples.

Around mile 20, the course had been re-routed to include a single-track out&back for about 8 miles.  It was a very very narrow single track, with a rock wall on one side and a drop into the Pacific Ocean on the other.  Every 20-30 steps, we had to throw ourselves to the side of the trail to let oncoming runners pass.  The constant stepping up on one side made my right knee a bit sore, but that worked itself out eventually.  The challenge here was keeping pace with everyone along the route so as not to mess up the flow, and also paying attention to the oncoming traffic.

For miles 25 and 26, which were through a gorgeous jungly redwood forest, I was joined by the race director of the Quicksilver Half.  He’s apparently pretty fast, and he told me stories about keeping pace with some of the top ultrarunners.  The conversation was inspiring – even though I was still thinking about dropping out, talking with him was a welcome distraction.

I’m not sure what happened next, but somewhere around mile 28 or 29 I ran across a bridge and saw a sign that said “Caution: Ladder 10 feet ahead.”  The next three miles were a vertical ascent up a brutal, steep stairwell of rock.  This was my first interaction with the Dipsea trail – now I see why it’s so famous.

I got to the aid station around mile 31 or 32.  At this point, I was seriously ready to call it quits. Until this point, I’d been spending almost every step thinking about when I could respectably drop out of this race [I had decided around the 50k mark would be acceptable.]  I sat down on the grass and contemplated the meaning of life for a bit.  A medical guy rebandaged my shin wound [This is the one that required 9 stitches.  The stitches had come out the day before the race.]  I took my shoes off and saw that there was a huge hole in one of my socks, which, I found out later, created a blister on my big toe that was about the side of a quarter.  I took my socks off and put them on the opposite feet in hopes that this would mitigate the pain of the hole.  This proved to be a good idea.

The next aid station was six miles away, and I decided I could probably run six more miles, so I took off again.  The logic here wasn’t completely clear to me in the moment, and now, 48 hours later, is still equally incomprehensible.

The aid station at mile 38ish was great – it had vegan chocolate chip coffee cake [literally one of my favorite foods, because they use potato flour as the base.  It’s really moist].  The next aid station was only a few miles away, so I kept going.  It was around this time that I figured I could finish the race, because there was less than a half marathon to go.

At mile 45.4, they told me it was another 2.8 miles to the next aid station, and 3 more miles after that.  I realized this did not add up to 50 miles, but I figured that a) this was my fist experience losing mental acuity during a race, or b) (more likely) the aid station volunteers didn’t know how much longer the race was.  I decided it was b).

Around this section, all of us runners were feeling very beaten down, and the hills were unrelenting.  At some point during the race, you feel like “Man, I’ve worked really hard up to now.  The last few miles should be a rewarding, easy downhill.  We should coast to the finish line.”  Unfortunately, both nature and the race directors didn’t agree with this assessment.  Those last two hills were punishing, and the downhill was too steep to really take advantage of with any speed to speak of.

It wasn’t until mile 48 that I found out, from another runner, that the race was 51.2 miles long.  This doesn’t seem like a big deal, but it was devastating to learn I’d have to drag myself through another 15 minutes of pain at the end of 50 miles. [Yeah, it was probably longer than 15 more minutes.  I wasn’t moving very quickly at that time].

I finished the race in just under 12 hours, about 10 minutes after the sun had set.

Immediately post race: ate some chicken and pasta, got my shin rebandaged, inhaled oxygen at the medical tent, walked back to my car (another mile – I couldn’t find the shuttles back to the parking lot), and somehow convinced two young men to jump my car in the dark (yeah, running down the battery is awesome).

Generally post race:  feeling good – No major soreness. Went for a short [2.5 mile] run this morning, and got a massage during lunch.  Should be back to regularly scheduled running program by the end of the week.

I’m pretty excited about having completed this run.  It was really an adventure run [rather than just a trail run], and it was the most mentally challenging race I’ve ever completed.  That being said, I feel very well prepared for any future [longer?] runs that might be on the horizon.

Thanks everyone for your support, and for listening to my boring and relentless runner-talk over the last several months [and just now, if you’ve made it to the end of this post].