Yesterday, I ran California International Marathon, reputed to be one of the marathon fastest courses in the world. With gentle rolling hills and a net downhill elevation, runners sign up to run CIM in hopes of a PR, a Boston Qualifying time, or just a fast day. 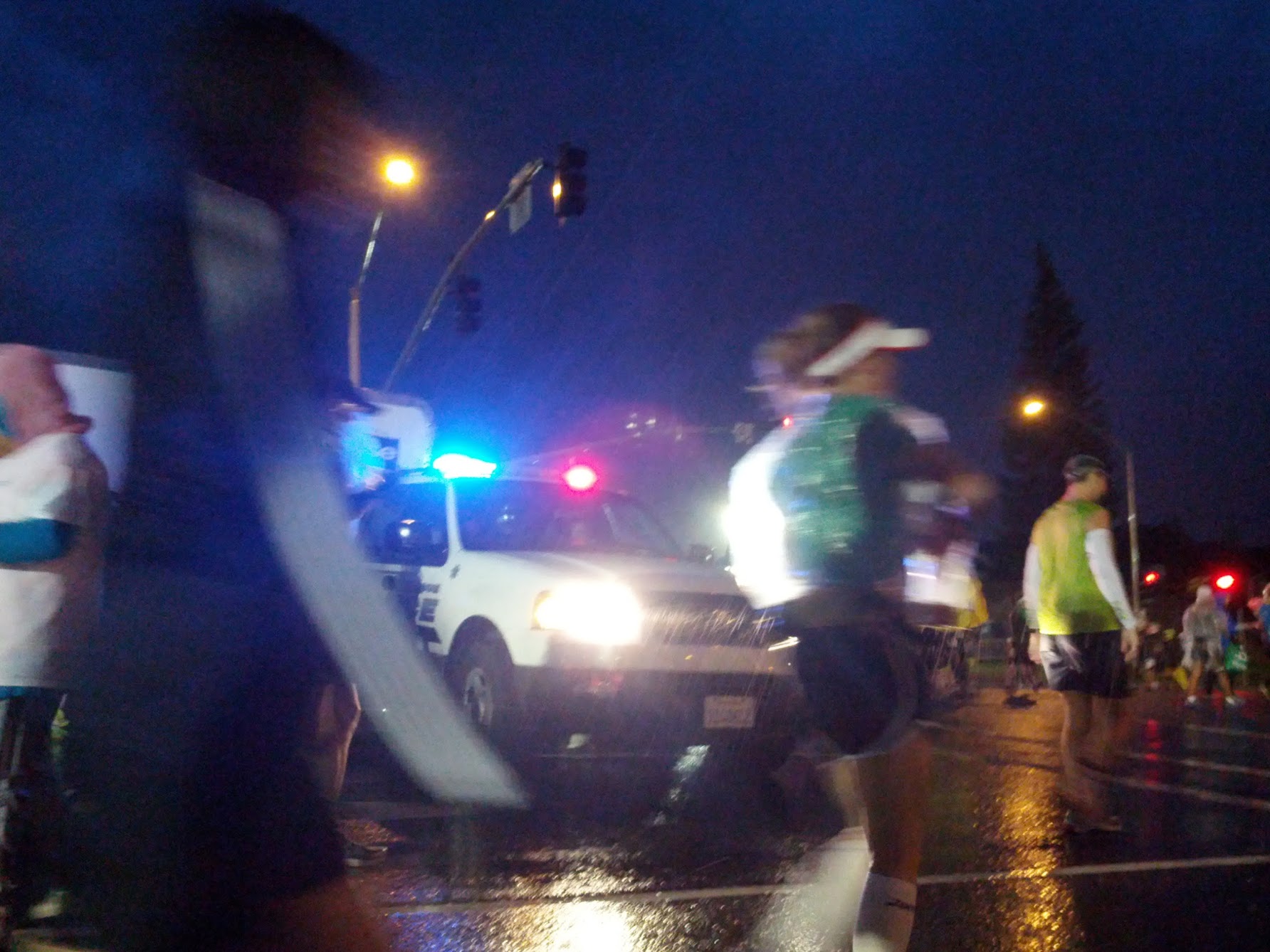 CIM startline. Look how reflective the pavement is – it was wet!

The last week, Northern California saw unprecedented amounts of rain, and Sacramento was no exception. The start line was buffeted by wind, and runners were hiding against walls and underneath gas station awnings to stay dry. Thousands of trashbags glowed in the artificial light.

This marathon was a reunion of sorts – six of us who ran the Inca Trail Marathon converged on Sacramento in the hopes of running a race slightly easier than Inca Trail, and spend some time together. We’d eaten dinner together the night before and discussed race-day tactics, such as wearing trash bags, hiding in pace groups to block the wind, and wearing short sleeves, long sleeves, no sleeves, jackets … the permutations were endless. 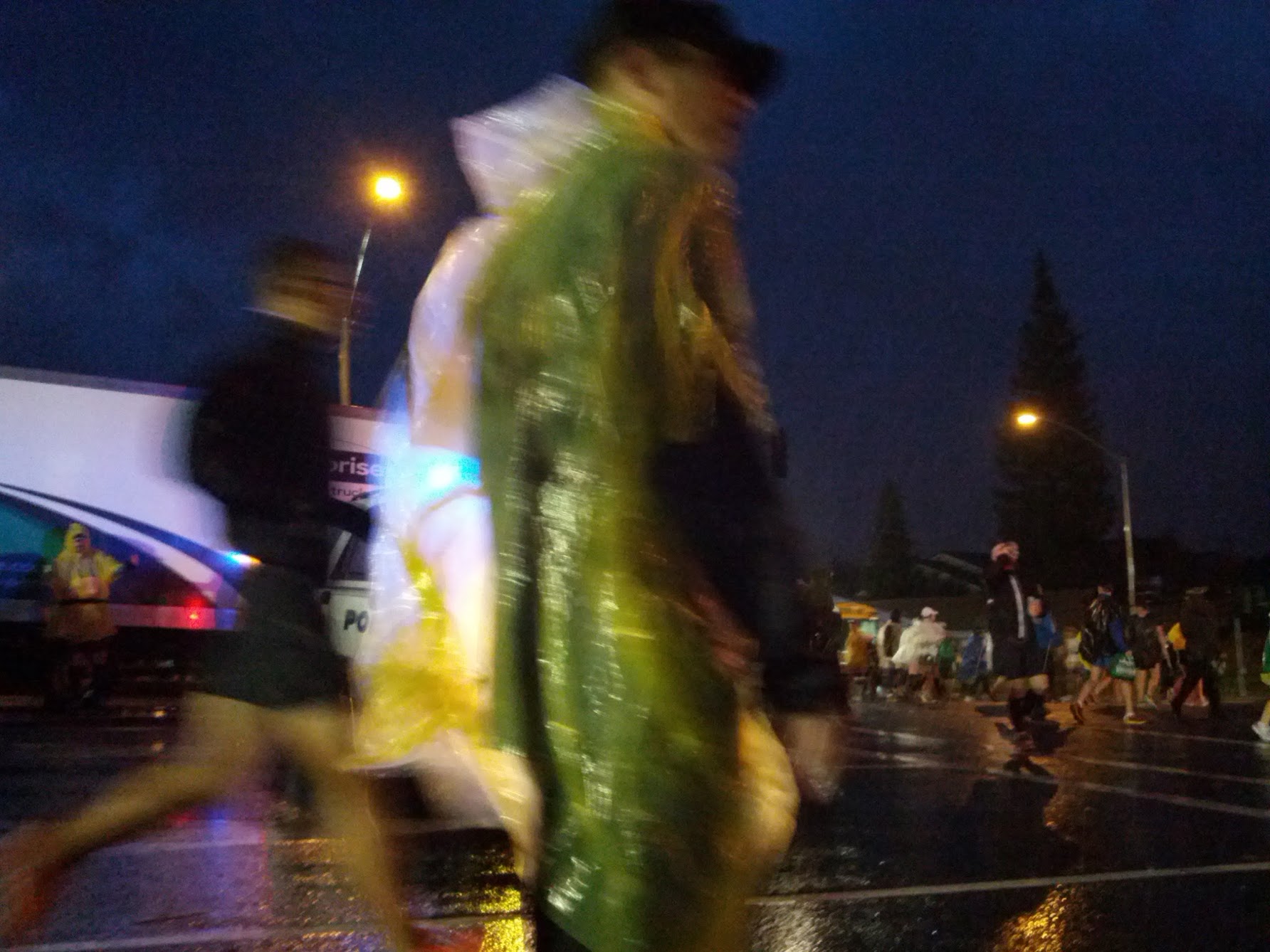 Despite the rain, the start line was festive. 8000 runners couldn’t believe how ridiculous the weather was, and the only thing to do was laugh and run.

My goal in this race was to run somewhere in the 4:00 range. I’ve been running a 50k or marathon a month for the last few months, and I have another 50k in early January, so I didn’t want to go out too strong that I couldn’t recover in time.

The first few miles of the race featured the rolling hills, and we were fortunate that the wind wasn’t terrible. I dropped my trashbag around mile three, and was soaked through moments later. Running in the rain was actually exciting. A hat kept the water mostly out of my eyes, and, once I mentally committed to being soaked through for the next several hours, running through ankle-deep puddles didn’t seem so much of a hardship.

The strangest part of the race wasn’t the weather oddly – I grew to like that component. every so often, I would hear a dog barking … eventually, I realized it was a racer making those sounds. I was keeping pace-ish with a member of “Team Ah-some,” who was wearing a vibrant neon yellow shirt, and he seemed to be randomly barking every five or ten minutes. Around mile 18, I heard an actual dog barking, which was even more confusing.

Those cheering on the slidelines were amazing. Not only were they out in the rain, but they were creative and enthusiastic in their encouragement. One group was handing out beer. One woman was holding a “Just Keep Swimming” sign – so appropriate. My favorite was a guy who was yelling out things like “I’m making loud noises!” and “These are words of encouragement!” and “You are running, I am standing here watching you run!”

The last 8 miles were pretty rough. Road races aren’t my forte – the pounding of the pavement and the monotony of the terrain make it easy to get sore quickly (I qualified for Boston on a trail marathon – my favorite!). Around mile 21 I ran into one of the other Inca veterans, and we ran together for about a mile or so. 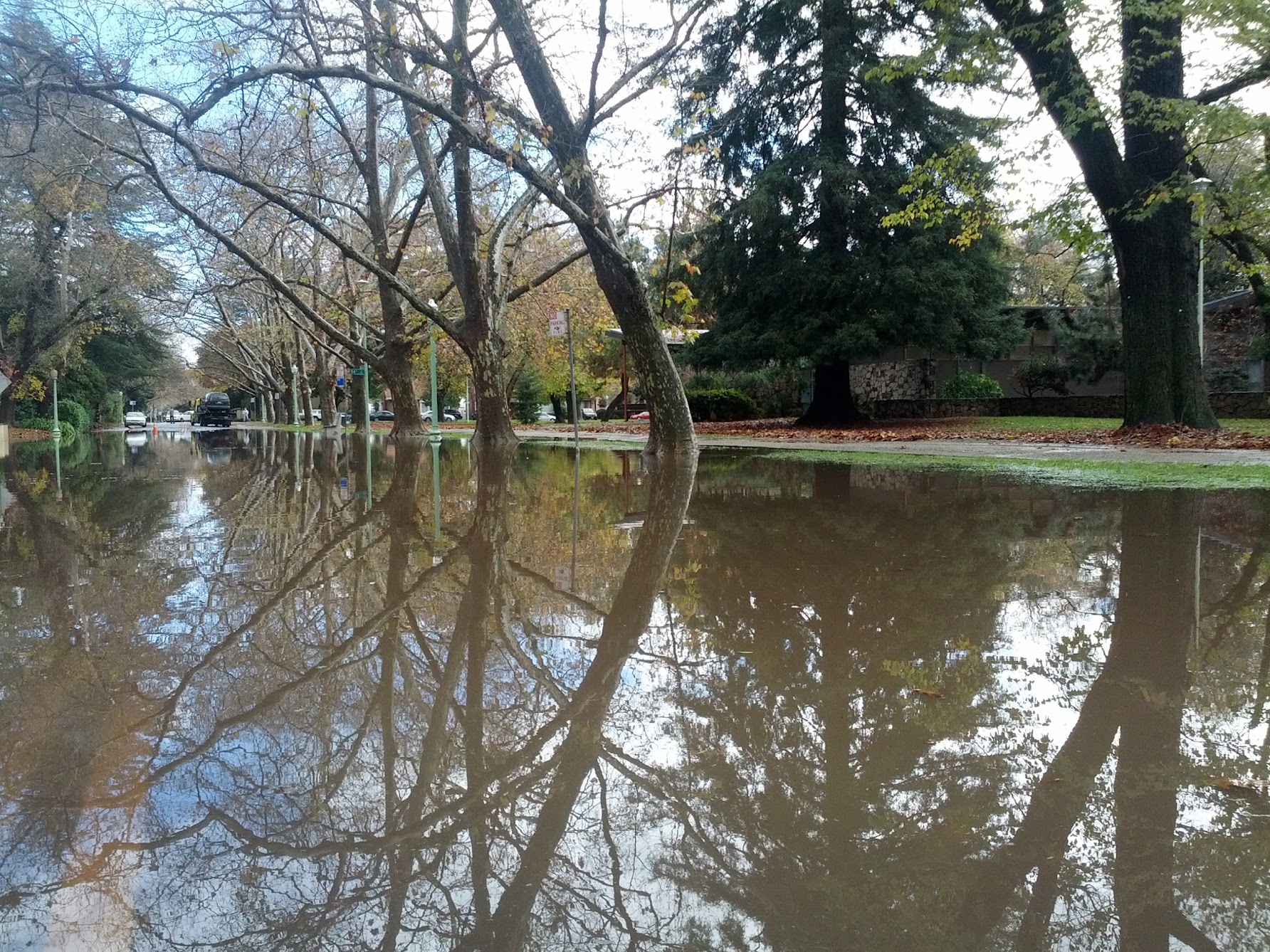 A flooded Sacramento street a few blocks from the race.

The last three miles of a marathon, I don’t give myself any excuse to walk. Even slow running is better than no running.

Trail runners are strange creatures. Even though we run extremely solitary races with sometimes fewer than 60 runners, we tend to glom together for vast stretches, sometimes up to hours. We talk, exchange stories, and encourage each other to keep moving. This camaraderie doesn’t crop in in marathons; there are just too many people trying to go fast, and runners tend to keep to themselves and leave other runners to their own goals.

At mile 24.5, off to my right shoulder, I saw a runner slow to a walk. Without thinking, I turned to him and encouraged him to join me – the race was almost over, and he could definitely do this last bit. He fell into step with me and we started running.

The last few miles of a race are always a bit strange. I want nothing more than to be done with the race, but at the same time, once it’s over, it’s over, and gone forever. In my mind, I play this game where I tell myself it’s only forty more minutes of running … only twenty more minutes of running … only ten, five, three, two … and suddenly the finish line is there.

This other runner and I kept each other going into the city, through tree-lined streets now streaming with shiny wet sunlight, and past the motivational music thumping through the air. He almost stopped twice, but we pushed through to the last 1/10th of a mile. When they split out men and women finishers, we grasped hands quickly and smiled, then split up to our respective finishing chutes. I didn’t see him again afterwards, and don’t know his name.

In elementary school, teachers say that when you point at someone, whatever you say to them comes back three times to you. Encouragement feels that way; sometimes, encouraging someone else is just as motivating to ourselves.

It was a mixed race for my friends. Several of them PRd despite the rain, and two of my girlfriends qualified for Boston. My Inca Trail team also did okay; a slow race for most of us, a DNF for one, and a wet (now non-functional) phone for another.

Overall, definitely a memorable, fun race. I finished in 4:06, which is close enough to what I wanted to do. The rain made it exciting, and getting together with friends, old and new, from all parts of my life, gave the weekend a festival-like feel. Not bad for marathon number 28.